Published on 7 Maggio 2020 by Comicart.tips On Original Comic Art Articles and reports

Here we are with the third part of our series following the Jim Lee Original Comic Art sales for charity. Yesterday #30 “Composite Superman/Batman” was sold for more than $11k, it’s time for a recap of the last ten pieces.

If you want to start from the beginning here’s part One:

(And before we start, if you enjoy this article and you’re a comic art collector, why don’t you subscribe to the Original Comic Art Tips weekly newsletter? Just go to the homepage, or if you want to read the latest issue click on the Archive button in the upper menu.)

This time the ten auctions raised a total of $94,272, less than the last ten, and it’s not a surprise, since #11-20 were full figure with background illustrations, and these were announced as head sketches, usually simpler and less valued drawings.

The surprise is that they’re NOT all headsketches… Bane, Poison Ivy and Composite Batman/Superman are waist up shots and Swamp Thing is full illustration with background.

And most of all the two highest prices ARE indeed headsketches (Joker and Death), with Death as the highest end price of these first 30 auctions. At the first announcement of 20 heads I imagined these would be all similar to #21, Zsazs, but then Jim probably decided to make them more detailed to raise more money for charity, and it all culminated in the striking, chiseled portraits of Death and The Joker. If he wants to raise some more money, after the original art sales, I’d be happy to buy a big print of the Joker…

But let’s see our charts. in the first one we see how the price changes based on subject matter and complexity, with the example of Zsazs, Cyborg and Atrocitus being both less known characters and the least complex drawings, while Death, despite being not a character Jim Lee is known for, makes a record mostly due to the beauty of the art. 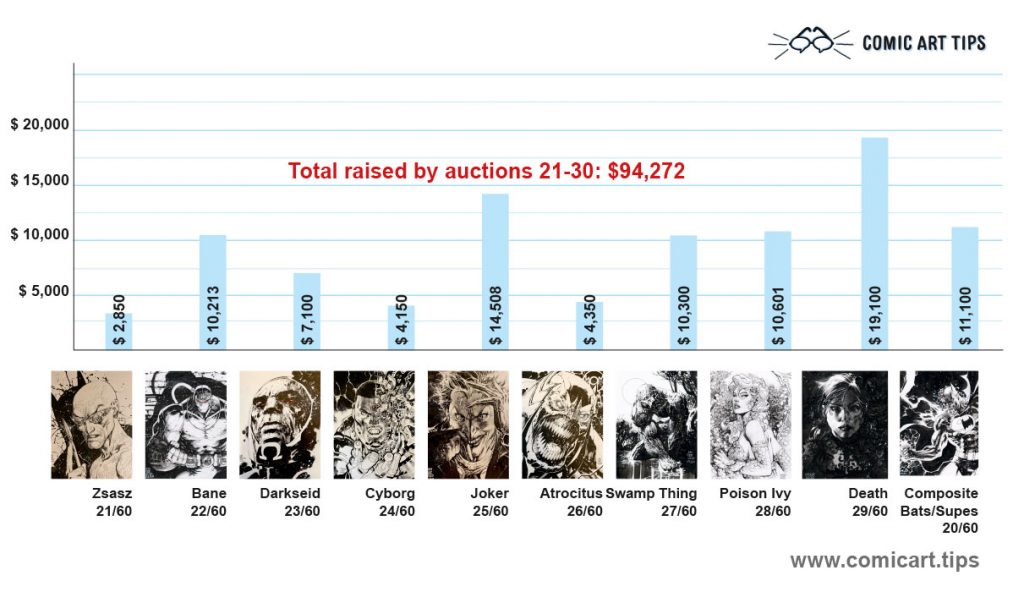 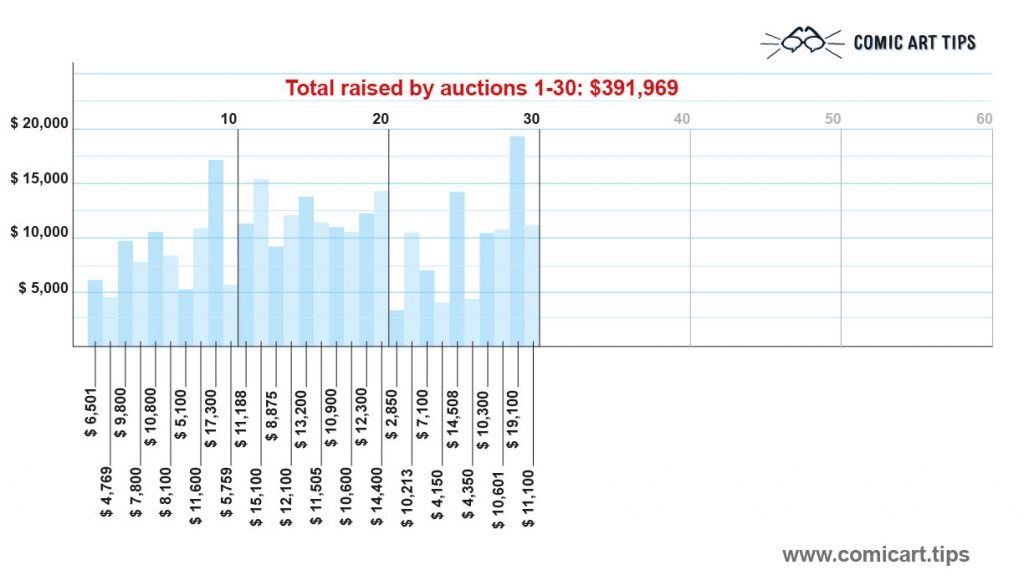 But stop talking about numbers and let’s see some art, that’s what we’re here for! 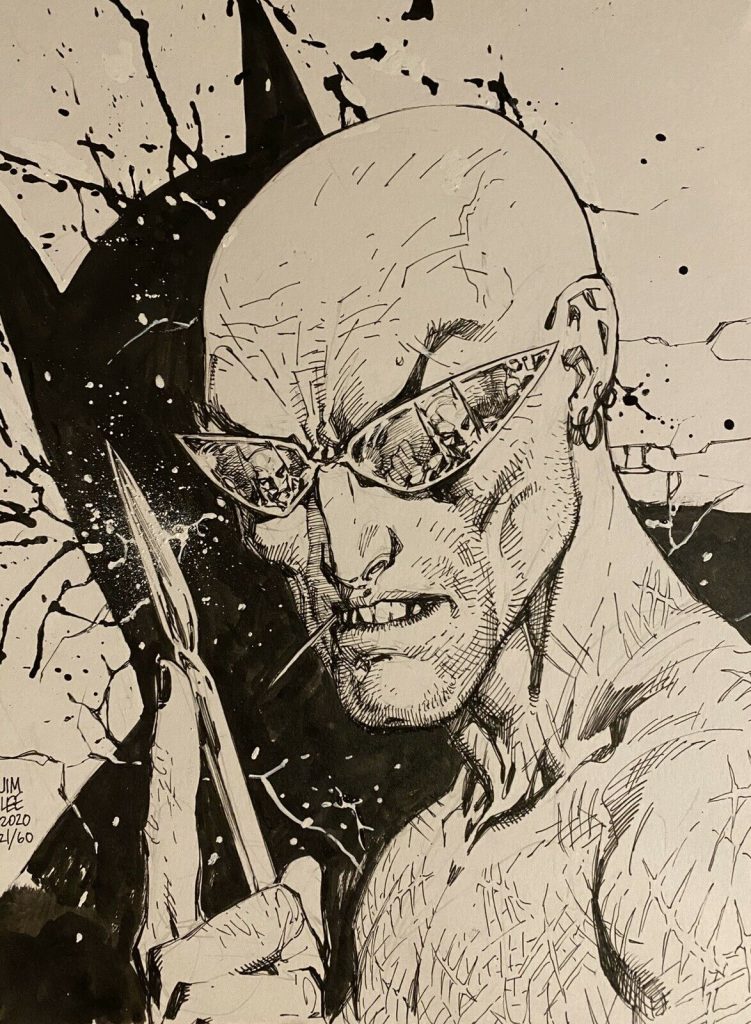 This one came with the announcement of a switch from the full illustrations of the first 20 auctions to headsketches for the next 20. This one remembered me of some free sketches Jim did until 10-15 years ago when he had time, much less detail than what we expect for cover art (the next announcement was that these will probably NOT become variant covers in the future).

This is also one of the less known characters he’s drawn until now (I admit I never heard of Zsazs before this sketch), and the result is the lower price of the 30 auctions we’ve seen. 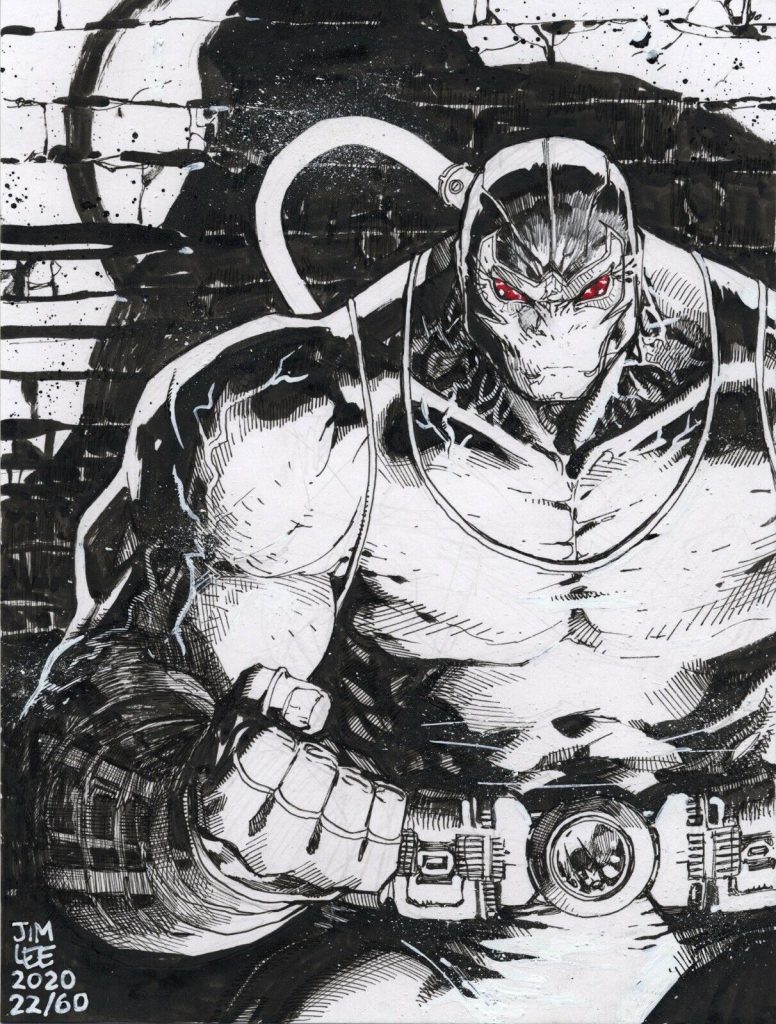 The headsketch only rule was already broken with the second sketch, a powerful Bane waist-up sketch. The market value for a similar piece of original art by Jim Lee was very different until now, but more money for charity!

“BANE DC Comics Original Art Sketch By Jim Lee Batman Villain!. Day 22, sketch 22 was supposed to be a headshot and technically it still is but when you do BANE, sometimes Bane decides to do you. Not sure what this really means other than the art sometimes demands or dictates the shot.” 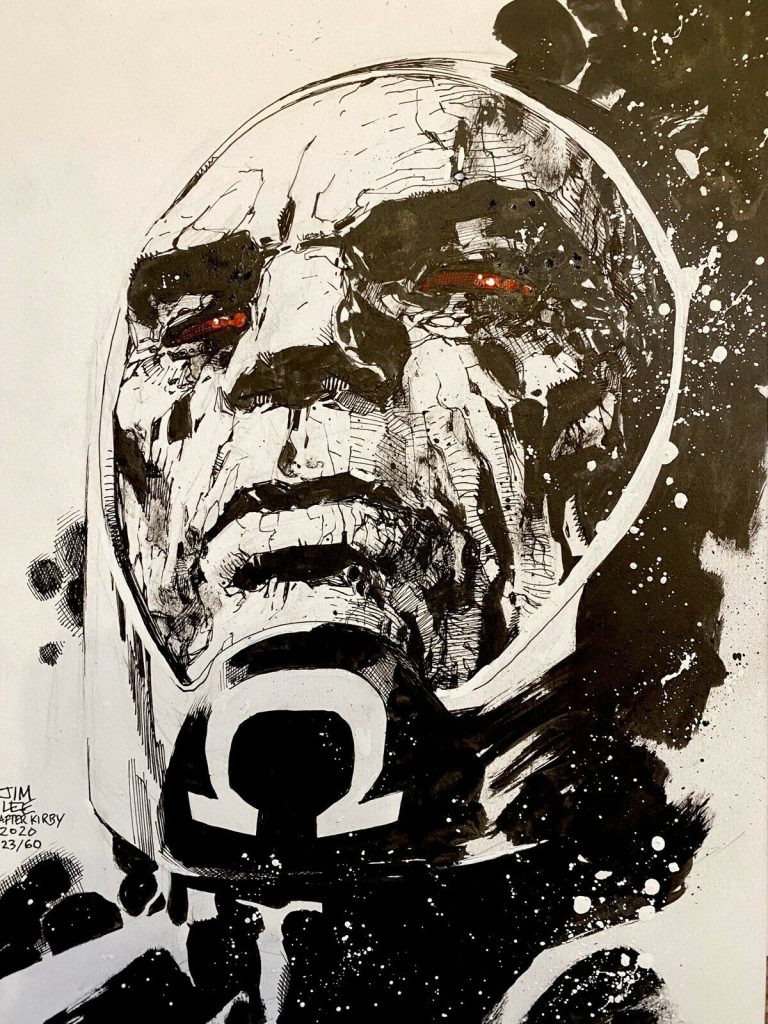 A step ahead in detail from #21, but still not cover quality. Darkseid is so powerful it lseems bigger than the other drawings. 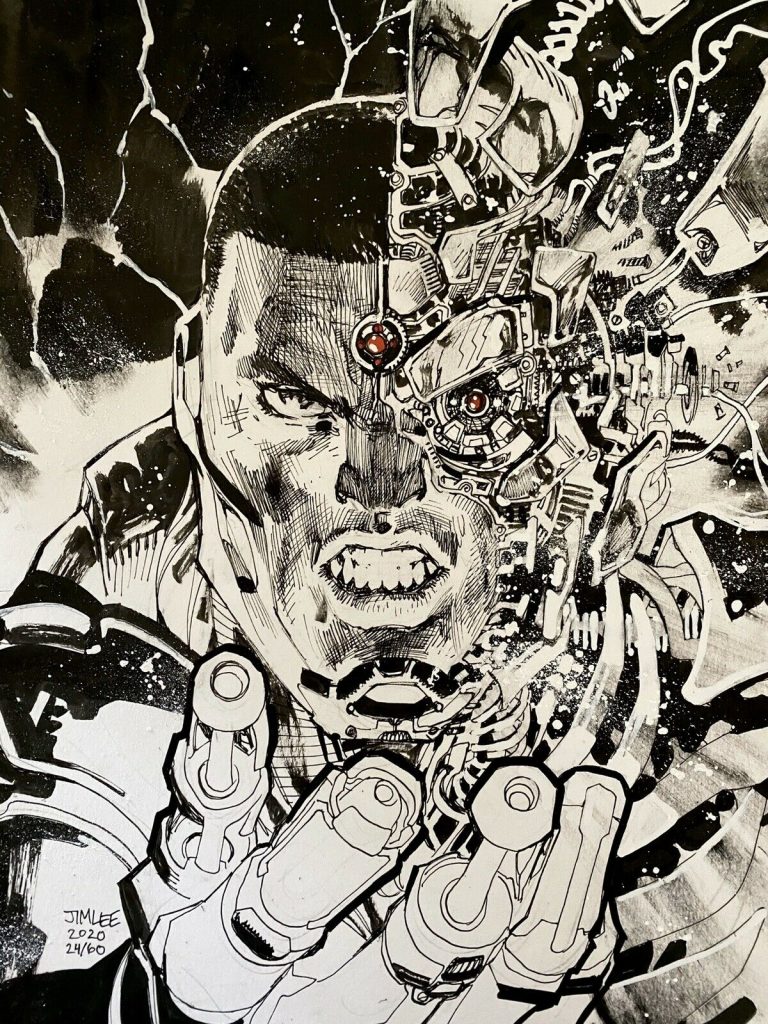 Another step ahead for cover quality and a great sketch, but the fact that Cyborg is not a top character and the headsketch format kept the price under $5k (not bad at all but lower than usual).

“CYBORG DC Comics Original Art Sketch Jim Lee Justice League Teen Titans. The superhero who is connected to all things digital, now drawn with pen and ink and whiteout and red marker on 9×12’ board.” 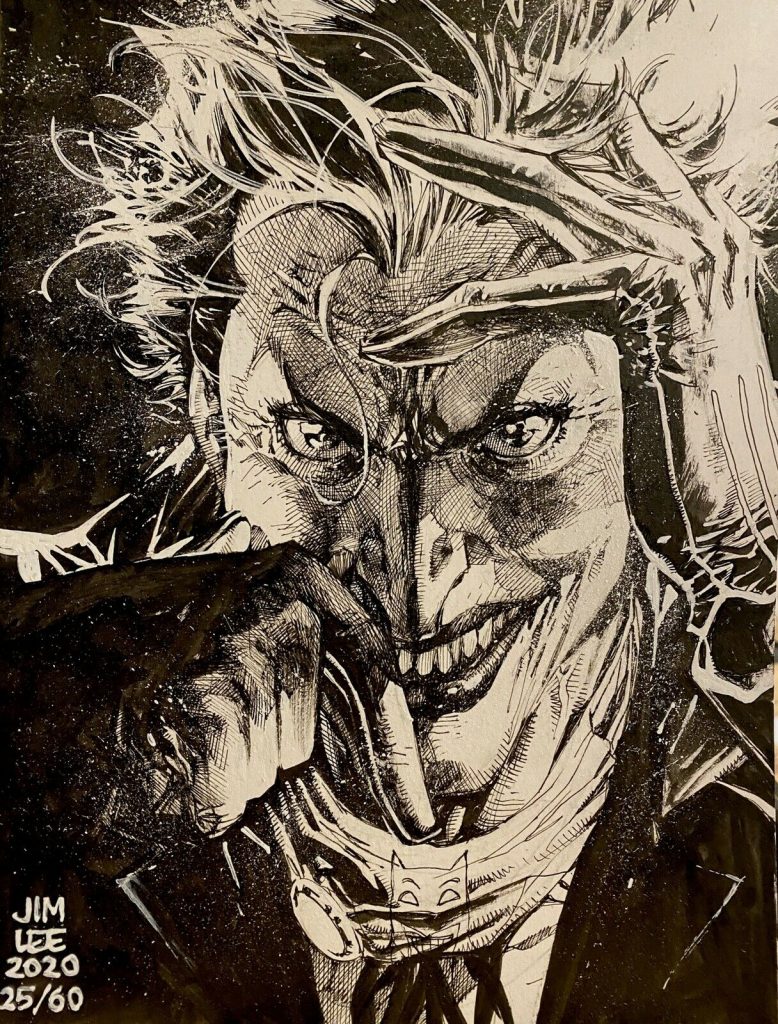 I think this is great, the best of the 30 “sketches” seen so far. This is not what you get with a head sketch commission, this is a fully detailed illustration, with a lot of fine line crosshatching. I wonder if this different style Jim Lee is using in some of these pieces will remain in the work he’ll do in the future. I hope so. By the way, the price tag shows that a great illustration goes beyond how much of the body of a character is drawn. And he’s wearing a mask!

“The JOKER DC Comics Original Art Sketch By Jim Lee Batman. we have the clown prince of crime—the Joker! Pen and ink and whiteout on 9×12”” 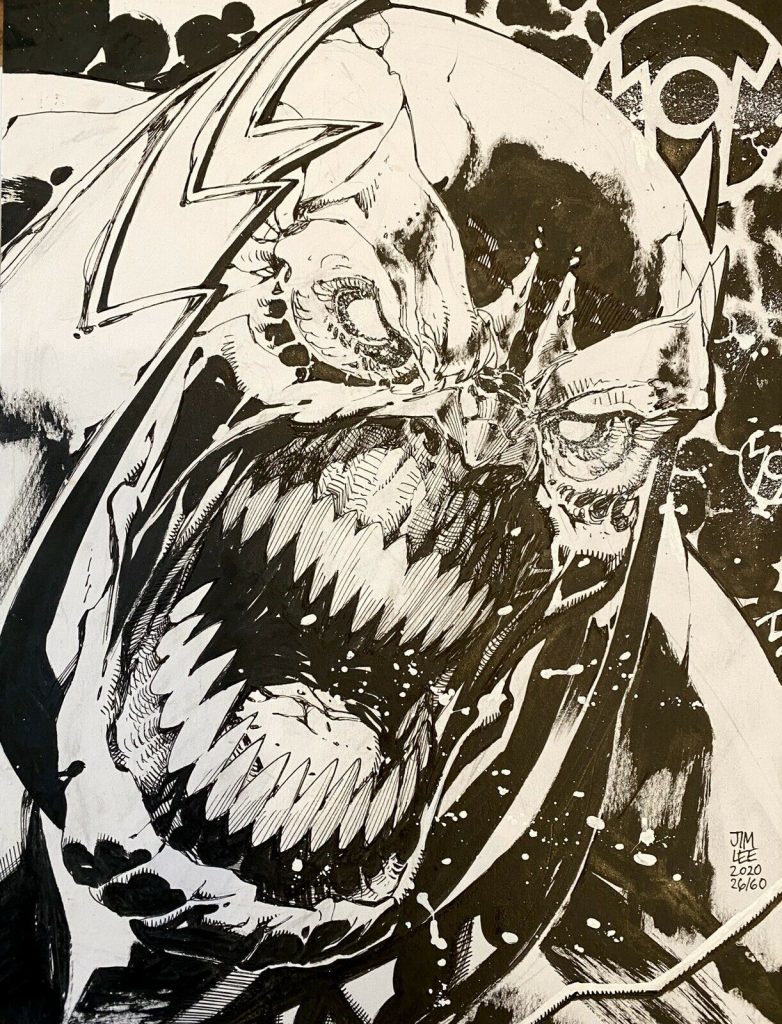 The not so famous villain and the headsketch format kept this one under $5k, but it’s a nice one. 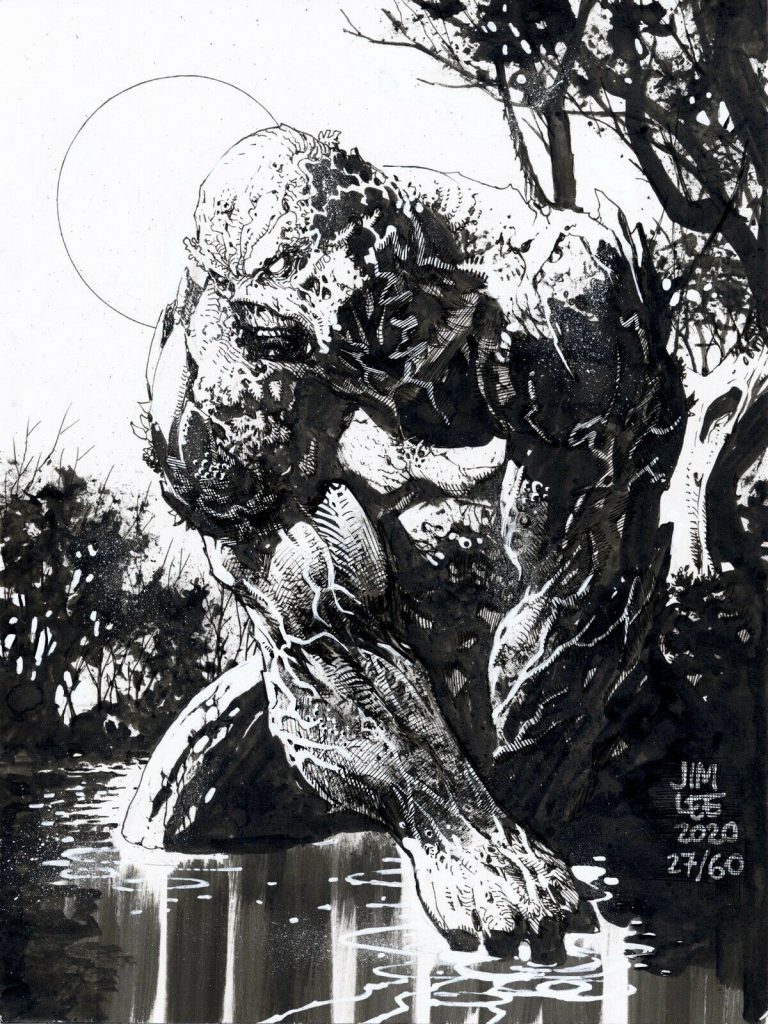 The only “full figure” with background illustration of these 10, and the price goes up over $10k again.

“SWAMP THING DC Comics Original Art Sketch By Jim Lee . here is my rendition of the Protector of the Green—SWAMP THING!” 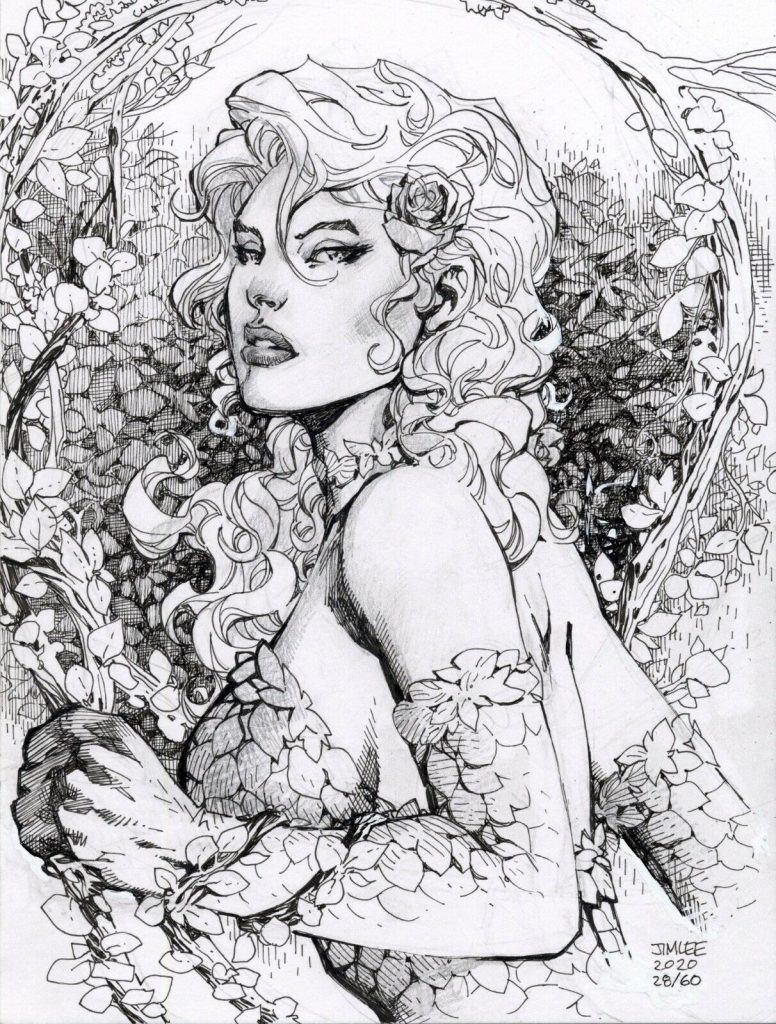 I hope the second highest bidder’s max bid wasn’t $10,600… A different approach on this one, with pencil grey tones. I can see this one becoming a variant cover. 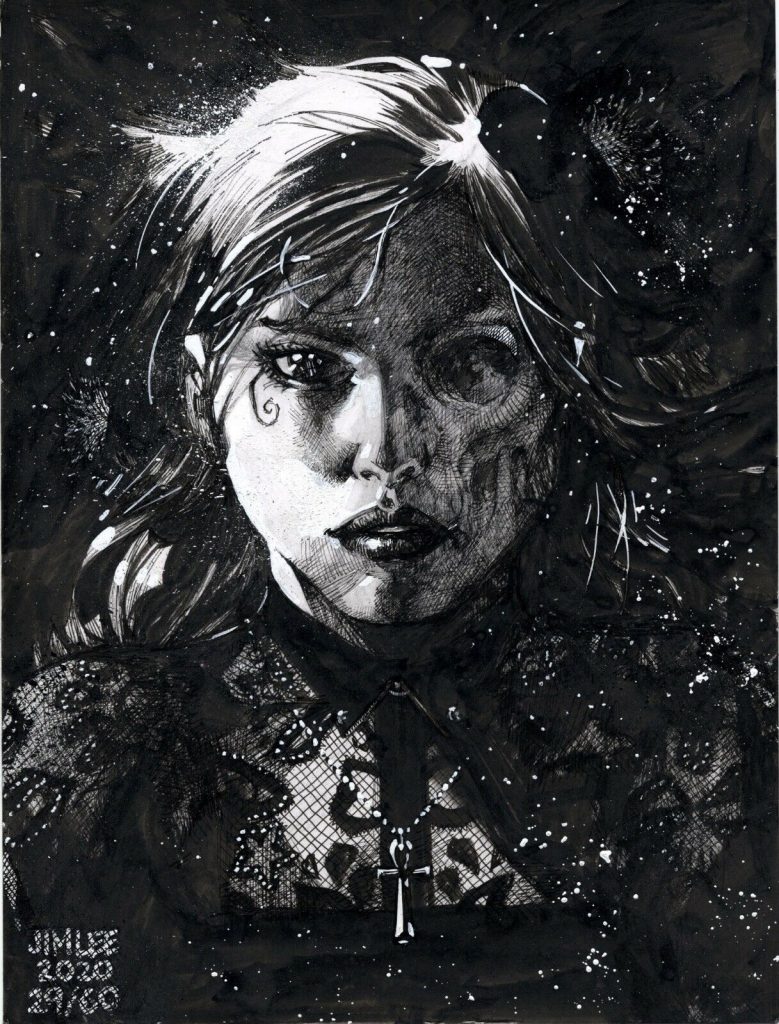 I already wrote about this one in the introduction, a more realistic/painterly approach, and the half face/half skull touch works really well. Fans of Jim Lee are usually more super hero oriented, but the great quality paid really well, more than some of the best published X-Men or Batman pages he’s drawn in his career. 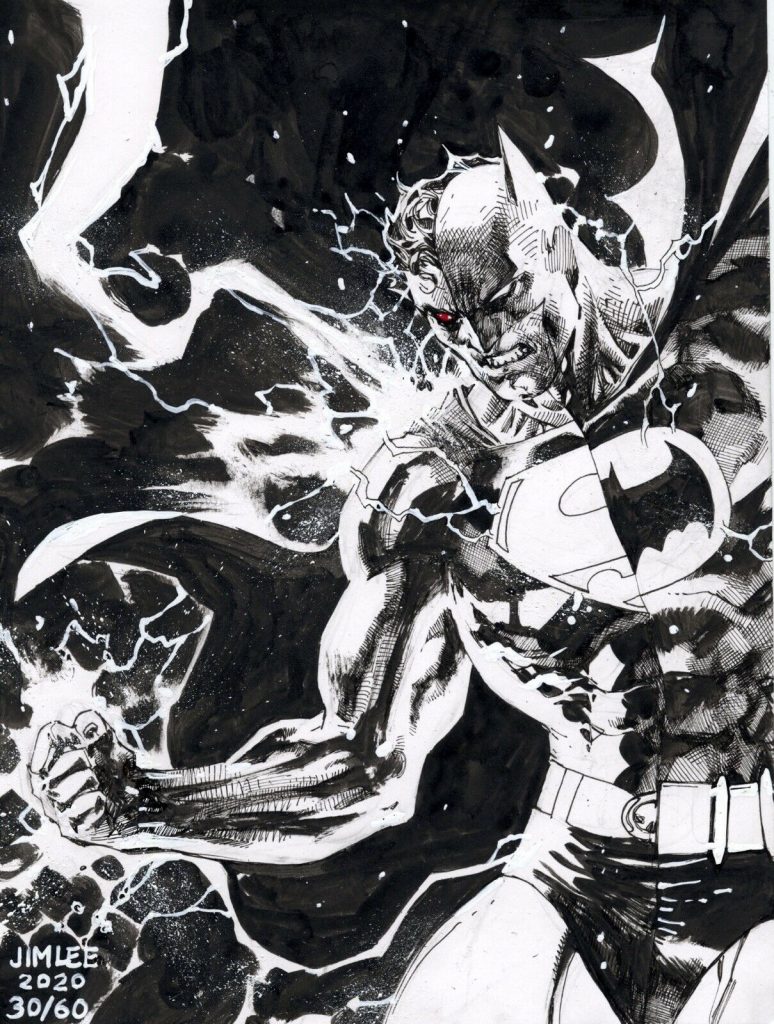 If I had to bet on the highest price for these auctions I’d probably put my money on a tie between this one and the Joker, with Death in the 3rd place… A classic Jim Lee cover layout, and you get Batman and Superman in the same drawing. Well $11k is not bad at all!

“COMPOSITE SUPERMAN BATMAN DC Comics Original Art Sketch Jim Lee World’s Finest. One of the most ingenious and intriguing villains of Superman and Batman—COMPOSITE SUPERMAN actually gains his powers from a mysterious lightning strike and Superman’s stash of statuettes of the Legion of Superheroes! Using his shape shifting. Powers, he turns his skin green and takes on the striking half Superman and half Batman costume that blew my mind as a young kid reading classic reprints of the silver age!”

End notes. see you in part 4 after the next 10 auctions of Jim Lee original art!

If you read till the end you may consider subscribing to the Original comic art tips newsletter, where each week I synthetize the most interesting, ending comic art auctions (so you don’t have to scroll 2,000 listings to find 3 you’re interested in), and analyze the most interesting auction results. Go to the home page of this website to subscribe for free! And come back here for the fourth part of this series after auction #40 ends!