Published on 20 Maggio 2020 by Comicart.tips On Original Comic Art Articles and reports

You’re reading the 4th part in a series of articles analyzing Jim Lee’s Original Comic Art Charity Auctions for Comic Book stores in need during the Covid-19 pandemic. Auction #40 has just ended, so we’re ready for an overview of auctions #31-40.

If you’re new here and want to start from the beginning here’s part One:

(And before we start, if you’re a comic art collector, why don’t you subscribe to the Original Comic Art Tips newsletter? A weekly dose of auction results analysis and new auctions highlights. Just go to the homepage, or if you want to read the latest issue click on the Archive button in the upper menu.)

What will happen now?

These are the last 10 “headsketches”, but as you can guess they’re not all headsketches, we’ll see a bust, two waist-up figures and two full figures (with #40 Raven, being a full illustration).

Jim Lee himself annouced on his social profiles that “Sketches 41-50 may be a little different than the rest as I try some mixed media.” and “This ends the “headshots” guiding principle for sketches 21-40.The next ten 41-50 will be mixed media and very different and experimental. Maybe a painted on canvas piece? Then the final 10 51-60 will return to the original style and approach that started this whole crazy campaign! Curious to see what I come up with? Me too”

But he forgot to tell us if these will still be headsketches or not. Well judging from #41 (Brainiac being auctioned now) they will.

Sketch #34 contained the first depiction of a regular Batman (alternate versions/costumes of Batman were already drawn), and as you could expect, it was exactly what fans were waiting for taking it to more than $20k. 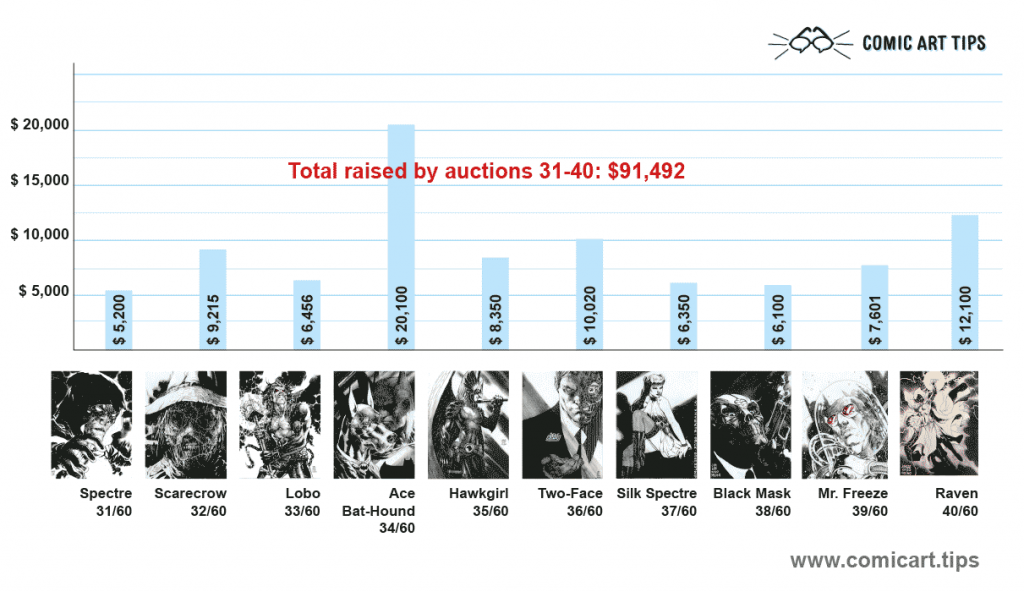 In the second chart we see that the total raised by Jim Lee alone for charity (not counting the many pieces donated by his colleagues) is now at $ with $200k already sent to store owners in need. 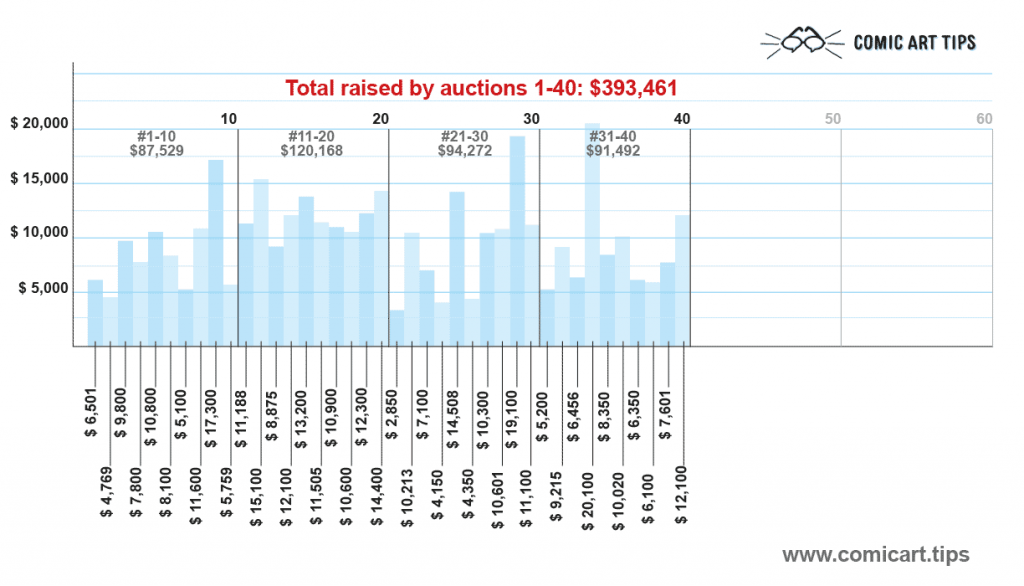 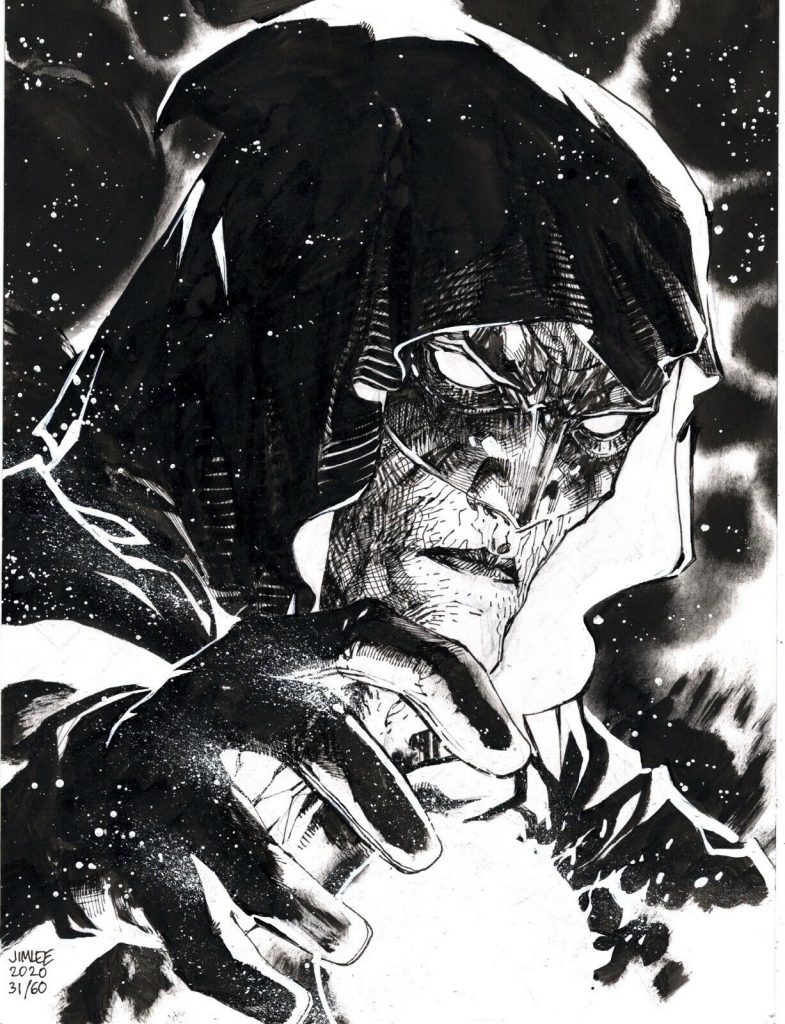 We start with Hal Jordan as the Spectre, a cool sketch, but headsketch+secondary character results in one of the lowest prices paid for Jim Lee original art in these last two months (6th lowest price in reverse order). Well $5k is pretty high for anyone not called Jim Lee…

“SPECTRE (HAL JORDAN) DC Comics Original Art Jim Lee. Sketch 31 of 60 is Hal Jordan as the all powerful, enigmatic cosmic character—the Spectre! After the epic Emerald Twilight storyline, Hal Jordan died to save the world but manifested himself as the Spectre to atone for his past sins! It was one of the darkest chapters in the life of who many fans consider to be the ultimate Green Lantern” 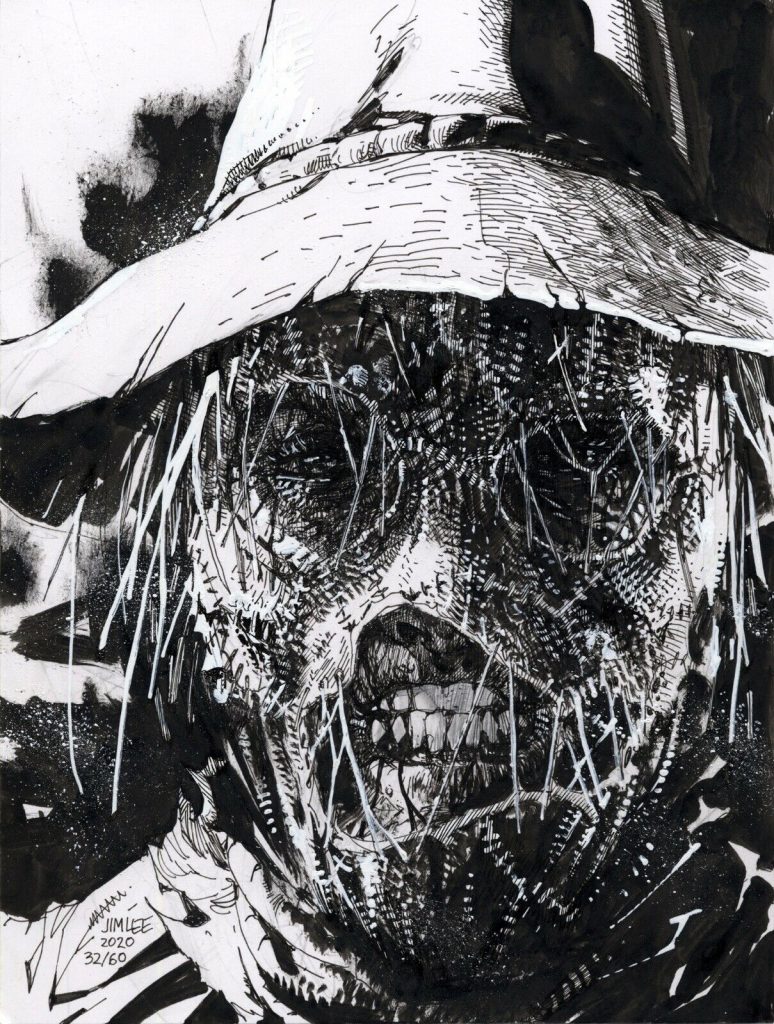 #31 was drawn in a more traditional Jim Lee/superhero style, Scarecrow here goes in a “scary” direction, like the Joker or Death portraits. For this one he used an almost photographic rendering style, add to this a Batman villain and the price goes up to almost $10k. 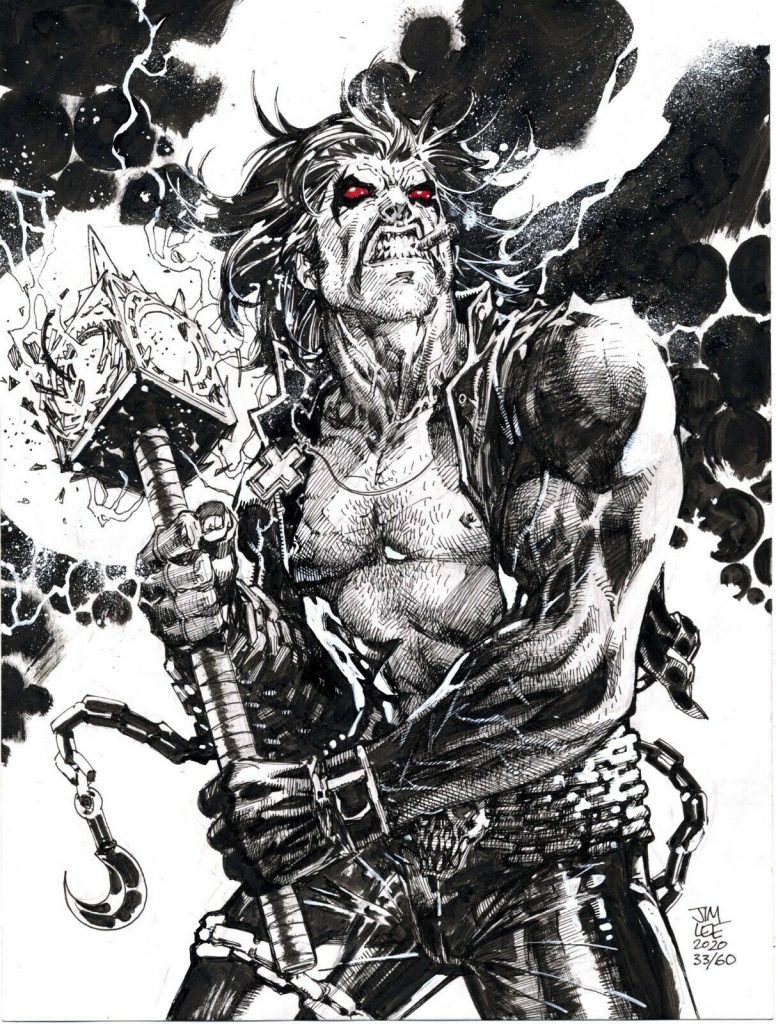 Back again to a traditional style, very dynamic and a waist up figure. Keep the pose, change the character from Lobo to Superman and you’d have a $20k sketch. 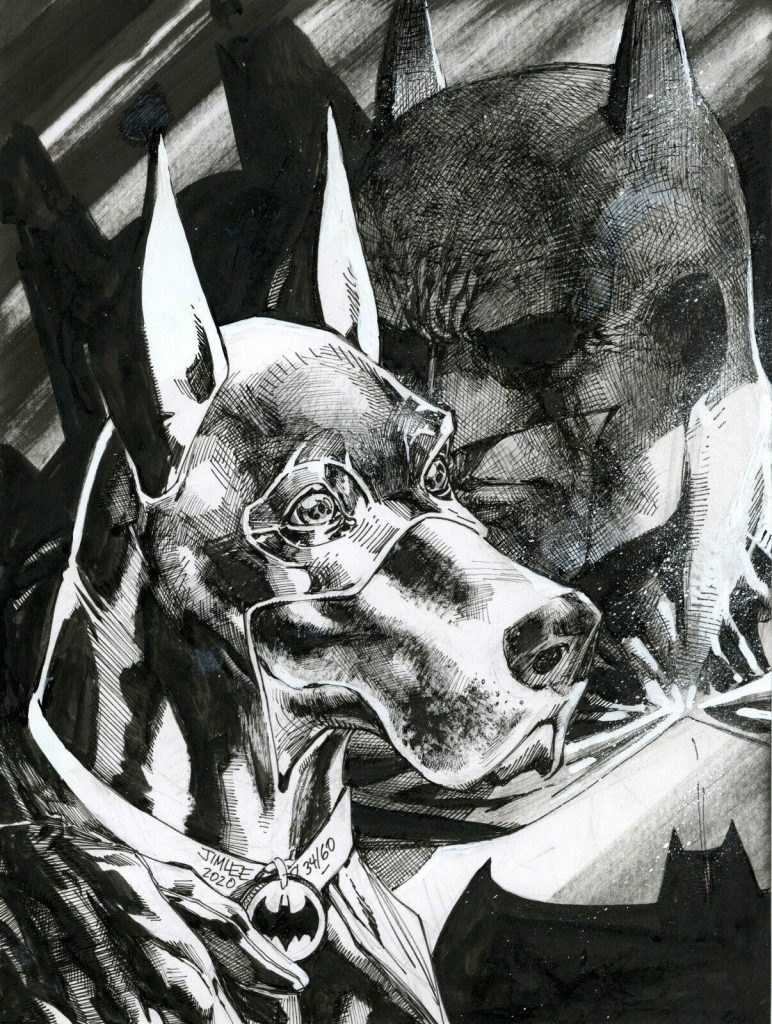 A sketch of Ace alone would probably not go over $2k, even if it was drawn by Jim Lee… That’s why probably he decided to add Batman to this one (the first regular costume Batman in 34 drawings) and the price skyrocketed to more than $20k for the first time. I have to admit this one, ironically, is my least favorite for now, Jim makes no secret that he doesn’t like to draw animals, but even the Batman looks like an afterthought. With money going to charity I’m happy bidders had a different opinion.

“ACE THE BAT-HOUND Batman DC Comics Original Sketch Art By Jim Lee. What I won’t do for charity!? As some of you know, I rarely draw sketches of animals but the winner of the Composite Superman auction chose Ace the Bat-Hound as the next DC character I should draw. So here is your chance of obtaining this ultra rare and unique 9×12” sketch of my facsimile of a canine. With his best friend of course.” 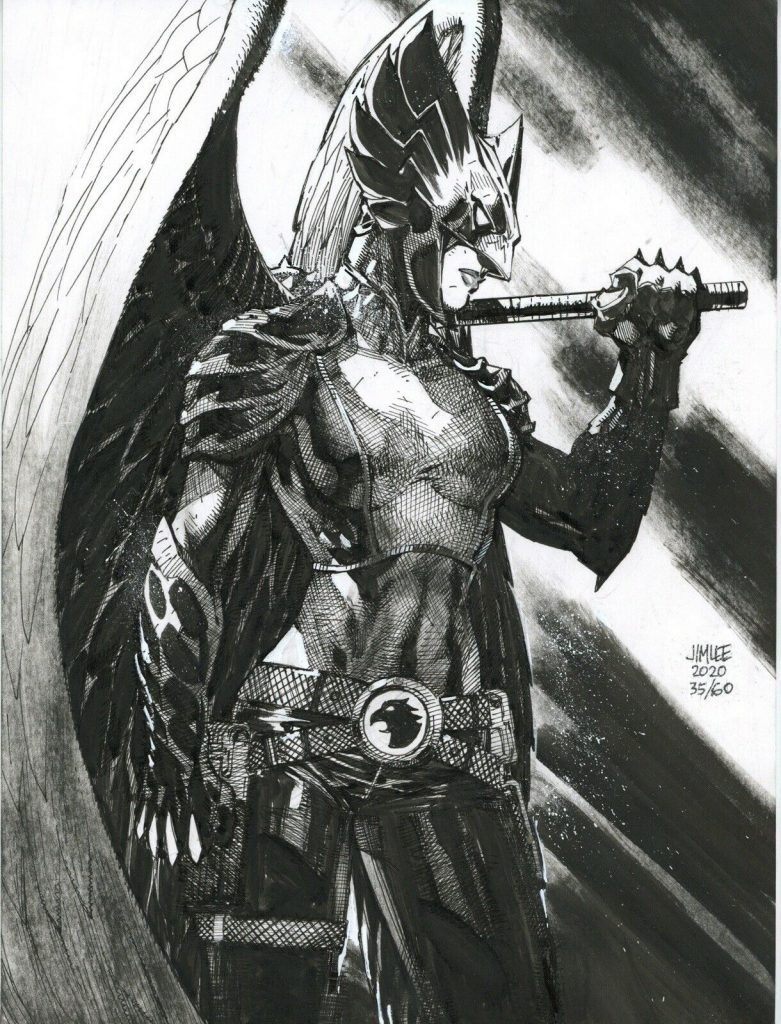 “HAWKGIRL Shayera DC Comics Original Comic Art Sketch Jim Lee Justice League. We’re already at day 35–can you even remember when this all started?! It’s flown by in a blur, at least for me. My understanding is the first 900k in the #comicbookunitedfund has already been given out to those in need so it’s great to see things moving quickly as the situation is definitely urgent. In general, sketches 21-40 will be headshots but as you can see from this shot—I really had to include her wings to complete the image I initially saw in my mind’s eye when given this prompt!” 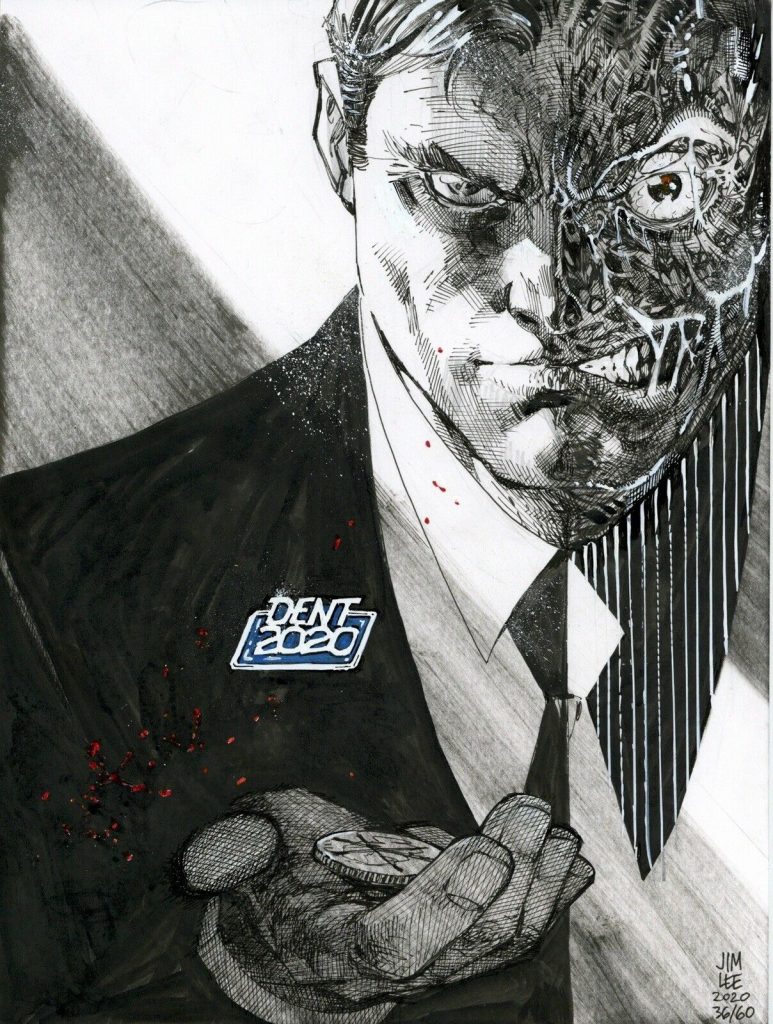 As I wrote for Scarecrow, detailed portrait+Batman villain makes for a $10k sketch. 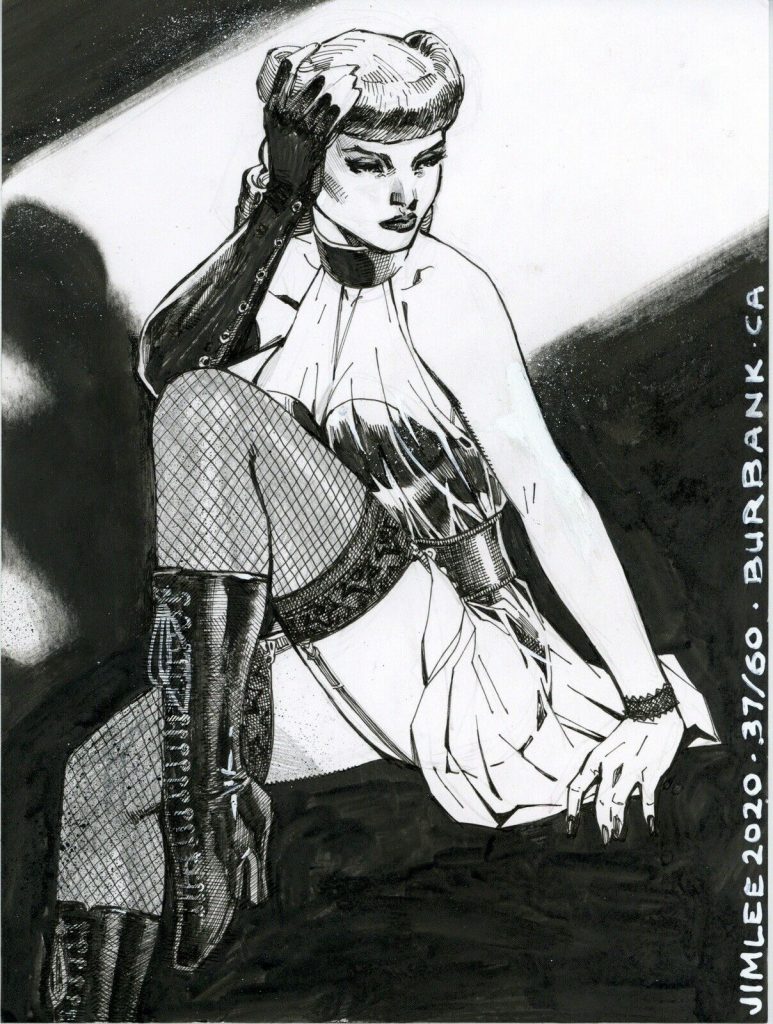 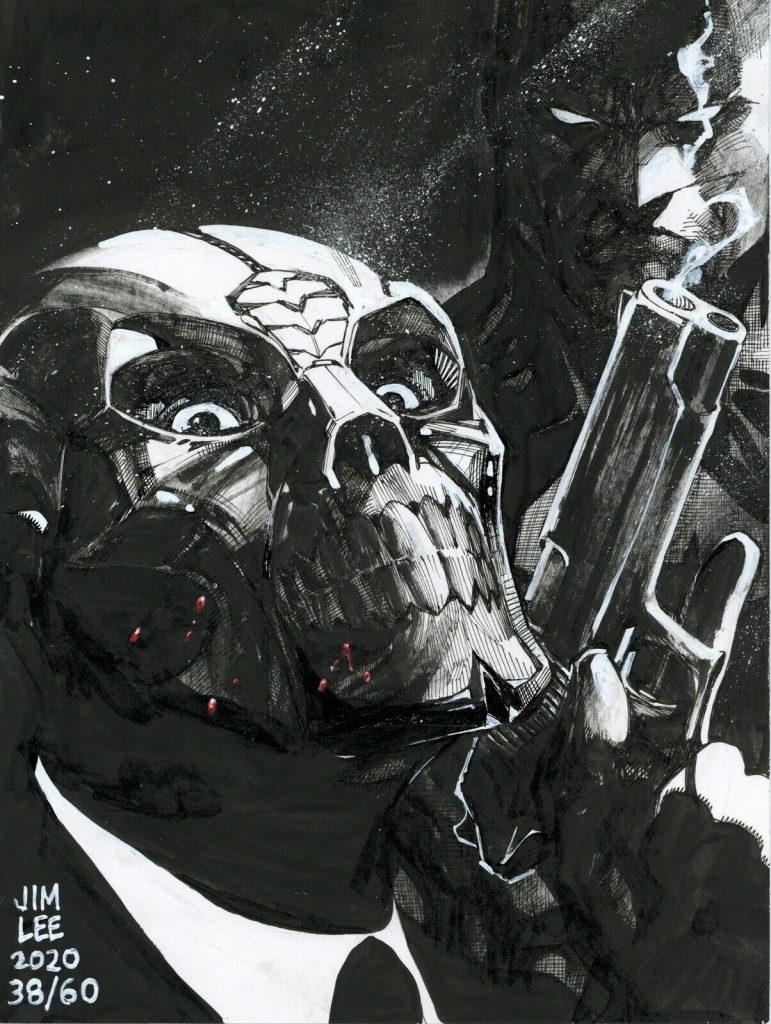 This is probably the 20th time I look at this drawing, but I just noticed for the first time that there’s Batman hiding in the dark behind the Black Mask. Probably it was hidden too well and many bidders didn’t notice, keeping the price relatively low.

“BLACK MASK DC Comics Original Art Sketch By Jim Lee Batman Harley Birds Of Prey. As chosen by the high bidder of Hawkgirl is one of Batman’s cruelest arch-nemeses the BLACK MASK!” 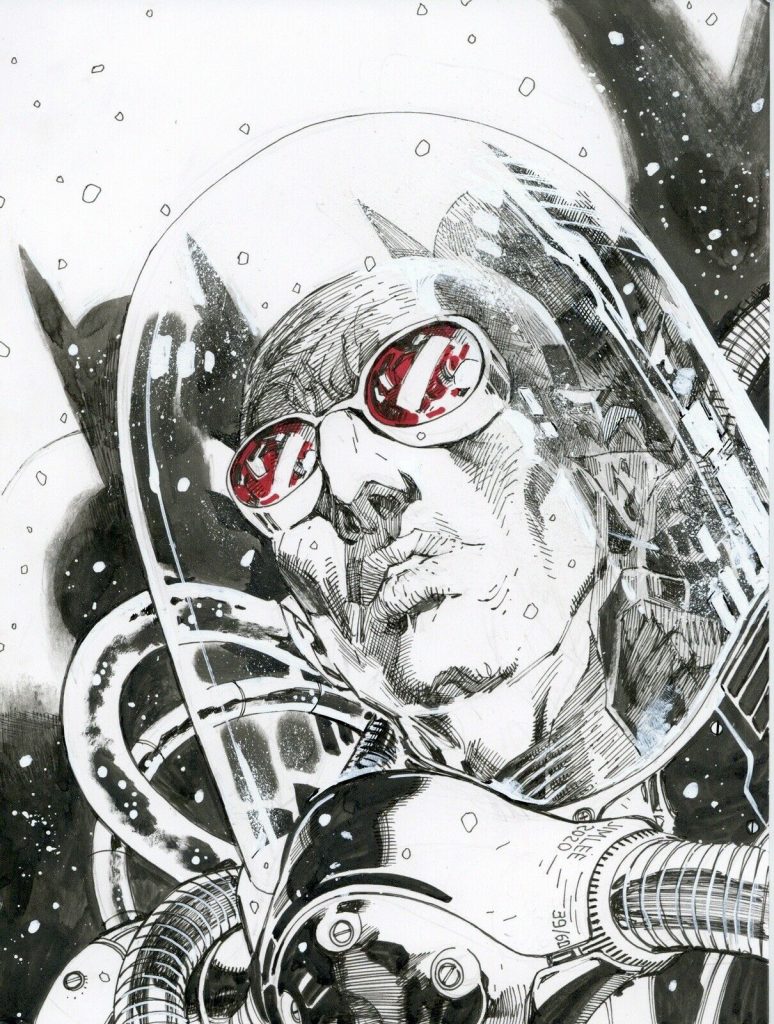 Freeze is a top Batman villain, and there’s a Batman face reflecting on the helmet, a great piece. 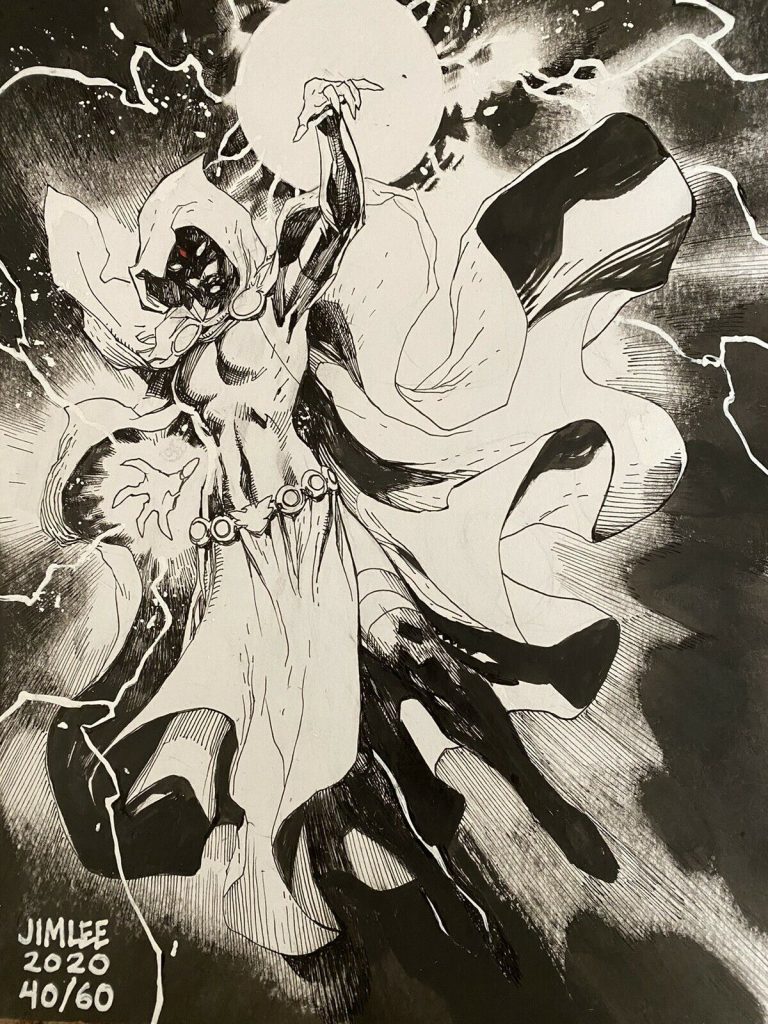 And so the 20 “headsketches” end with the exact opposite, a full, almost cover quality illustration of Raven by Jim Lee, the second highest price for this latest batch of auctions.

End notes. see you in part 5 after the next 10 auctions of Jim Lee original art!

If you read till the end you may consider subscribing to the Original comic art tips newsletter, where each week I synthetize the most interesting, ending comic art auctions (so you don’t have to scroll 2,000 listings to find 3 you’re interested in), and analyze the most interesting auction results. Go to the home page of this website to subscribe for free! And come back here for the fifth part of this series after auction #50 ends!