Published on 14 Aprile 2020 by Comicart.tips On Original Comic Art Articles and reports

Legendary Comic Artist Jim Lee is helping his way in the Covid-19 pandemic by doing what he does best: drawing superheroes!

Here’s the description in his own words:

“Here’s a chance to get some Jim Lee original comic art and do something good during these unprecedented times. I’ll be drawing and posting 60 different sketches – one a day – over the next two months which I will then be auctioning off with all the proceeds going to a fund (Book Industry Charitable Foundation) which will benefit local comic shops/brick and mortar stores in need. High bidder of each sketch gets to pick the next DC character I draw for the next sketch in queue! No character (version) to be repeated!”

Prices will go up:

These 60 pieces of original Jim Lee art will then be collected by DC Comics in a single volume, and each drawing is going to be published as a variant cover to a future comic book (adding to the value of the original art). Auctions are going great, the first 10 pieces already raised almost $90K, I’ll be following along documenting these auctions 10 at a time, so come back next week for auctions 11-20.

I think he started with the idea of doing “quicker” sketches (look at #1, Nightwing), then when he/DC decided to publish them, began to add more detail, culminating (for now) in #9: a cover quality depiction of Batman and Catwoman.

End prices vary, based on character and detail, from the $4,800 of Bizarro to $17,300 of Batman/Catwoman. I’ll be putting them in a chart, we’ll see at the end (in a final post) how the curve goes.

Price Chart for the first 10 auctions: 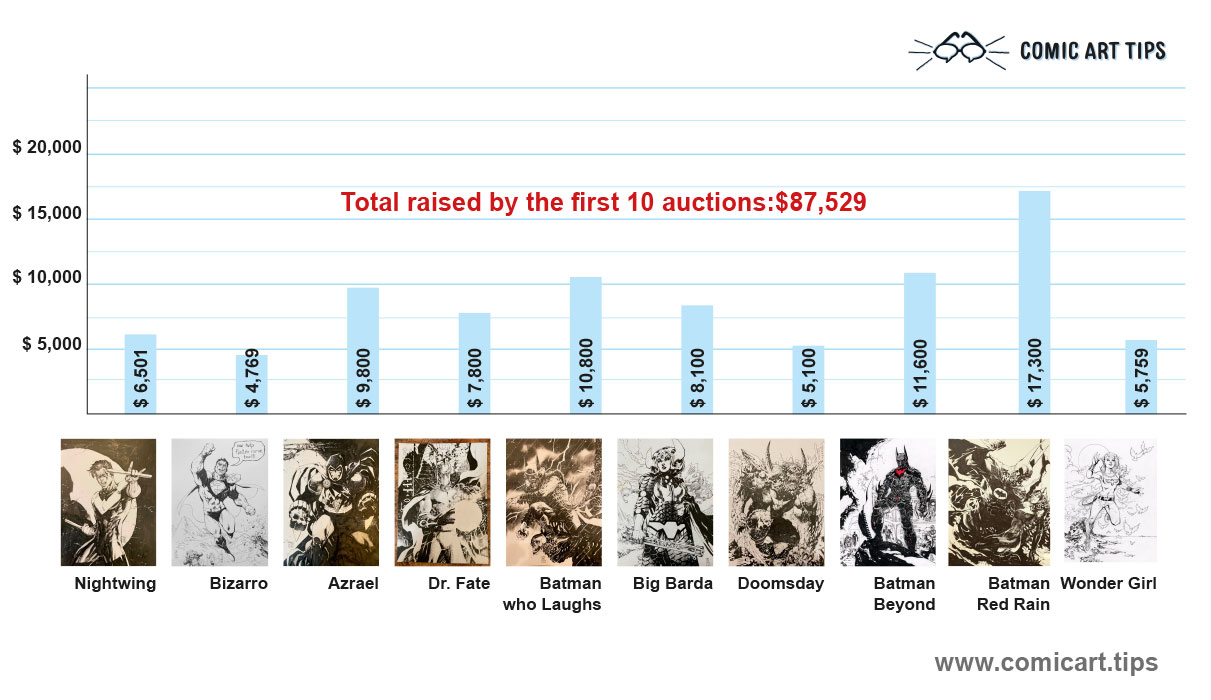 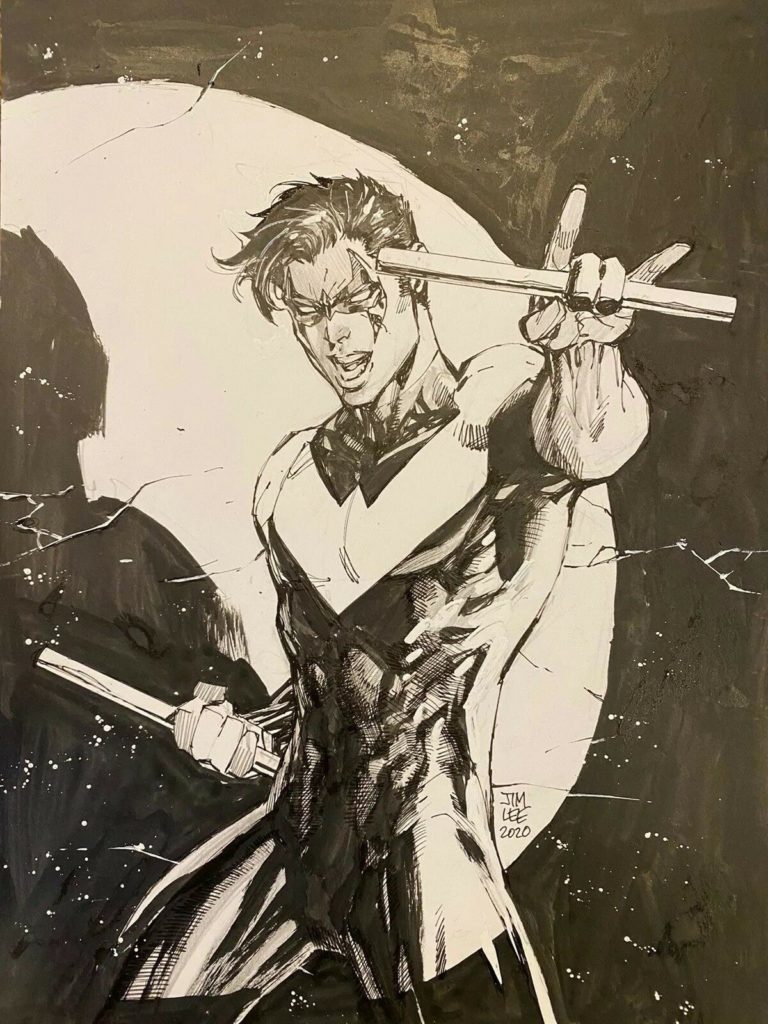 Description: “Original Pen and Ink Illustration of NIGHTWING by me—Jim Lee. Here’s a chance to get some original art and do something good during these unprecedented times. I’ll be drawing and posting 60 different sketches—one a day over the next two months which I will then be auctioning off with all the proceeds going to a fund which will benefit local comic shops/brick and mortar stores in need. High bidder of each sketch gets to pick the next DC character I draw for the next sketch in queue! No character (version) to be repeated!” 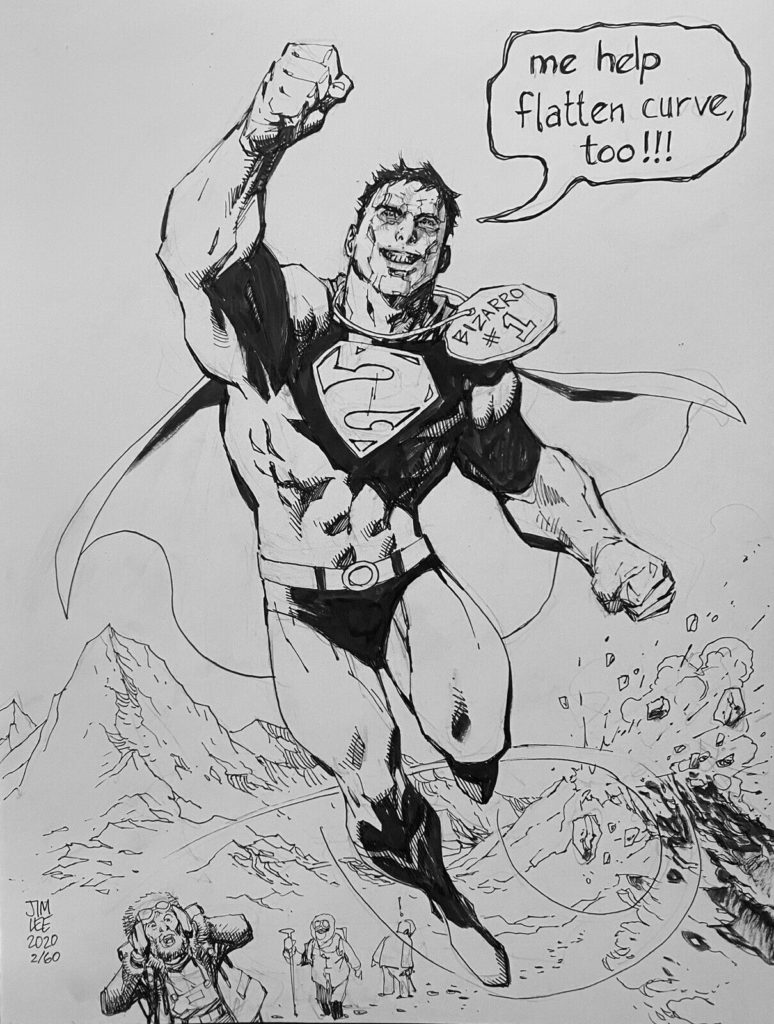 Description: “Day 2 of 60! I am 99.9% sure that I have never drawn Bizarro Superman before so it was both a challenge and a lot of fun (and most likely my first and last shot of Bizarro Superman so a true art collector’s item)!

I called my past collaborator—writer extraordinaire Geoff Johns—for some help and he graciously provided me the gag and pitch perfect dialogue. Thank you, buddy!” 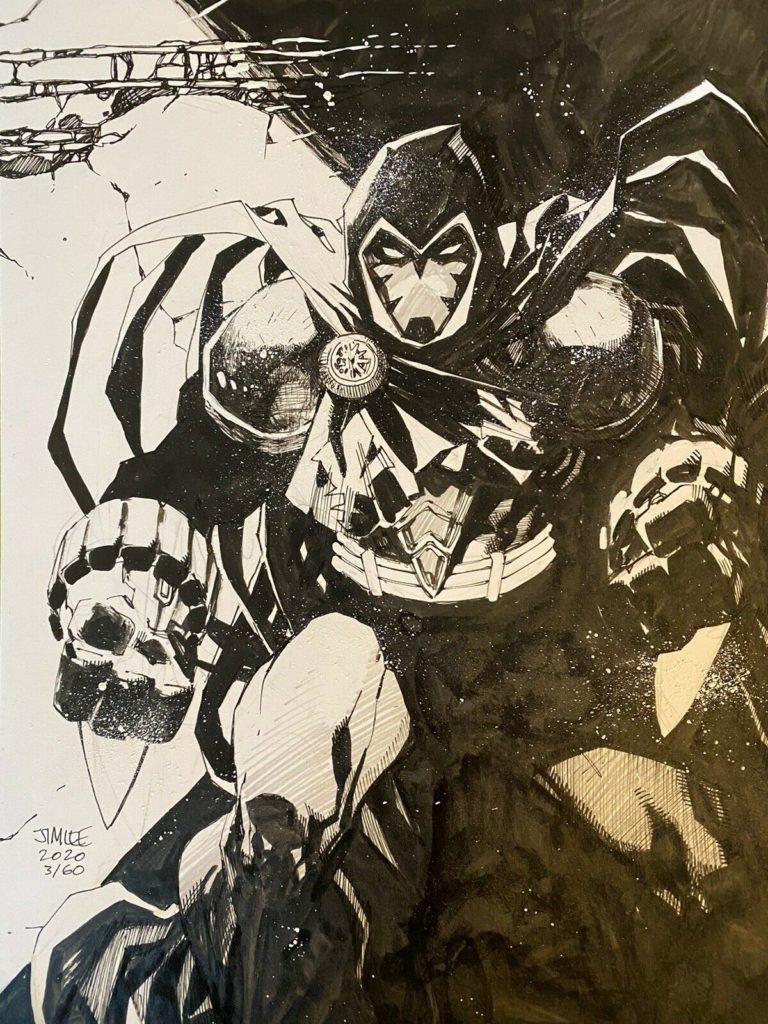 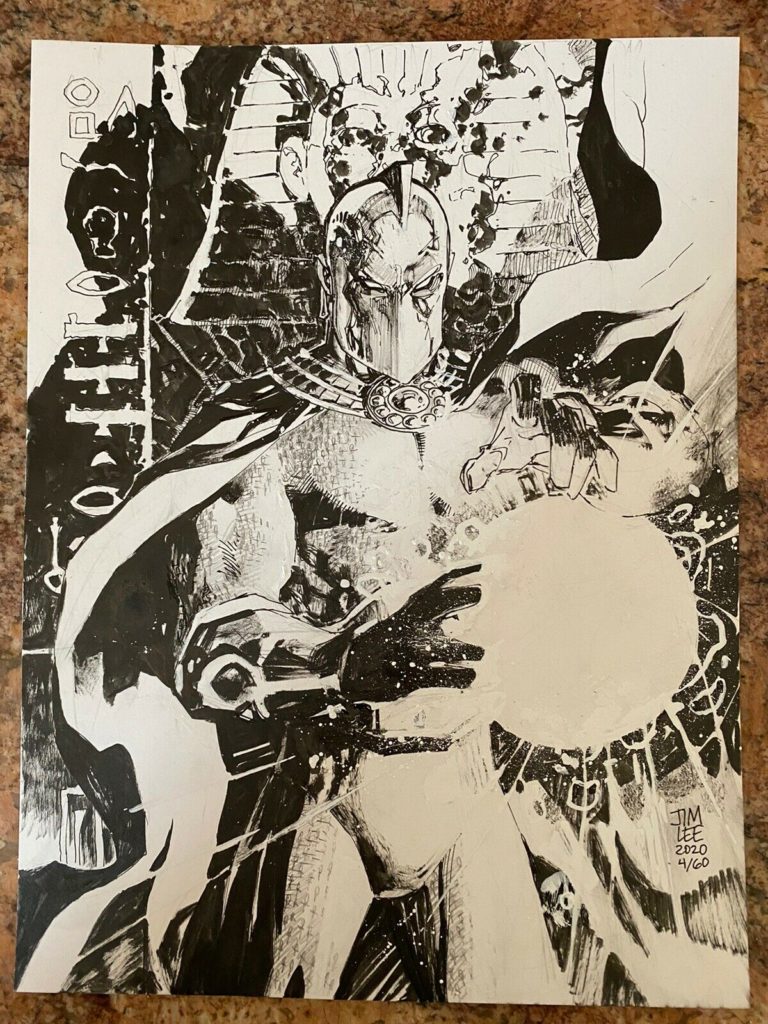 This is the first one that really surprised me for the amount of work put into it, really a great piece, love the background and the “special effects”. 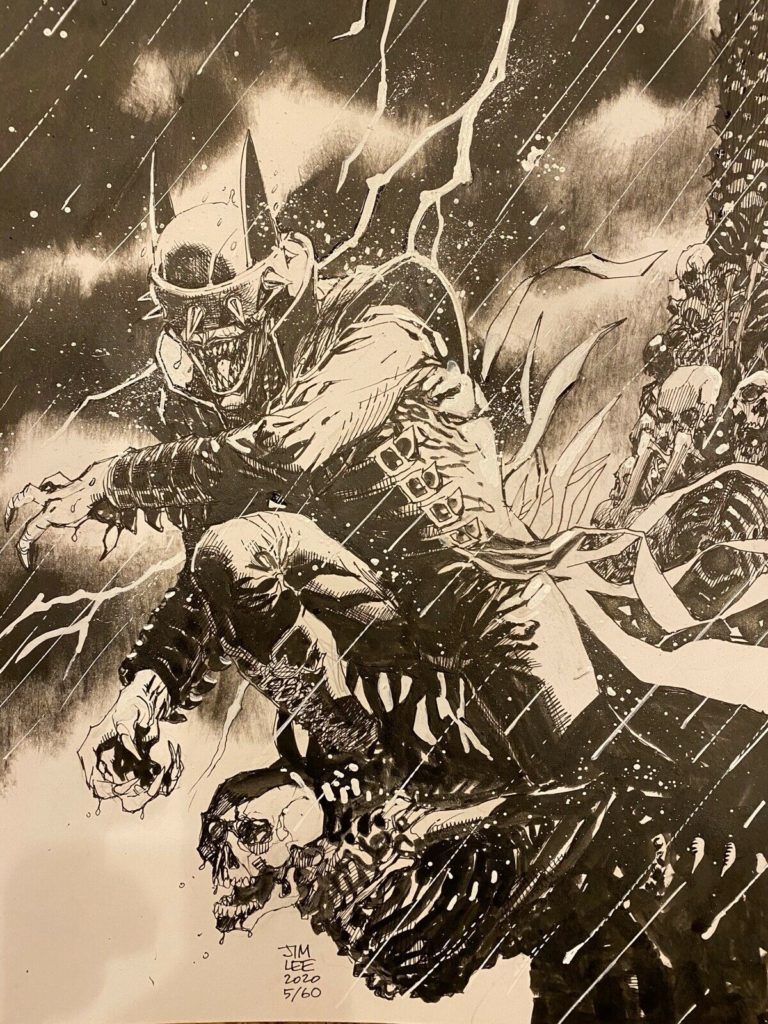 The first cover quality piece, with background, and depicting a top character. The pose is also a classic, used by Jim Lee in many Batman illustrations, the price followed, going over $10k for the first time. 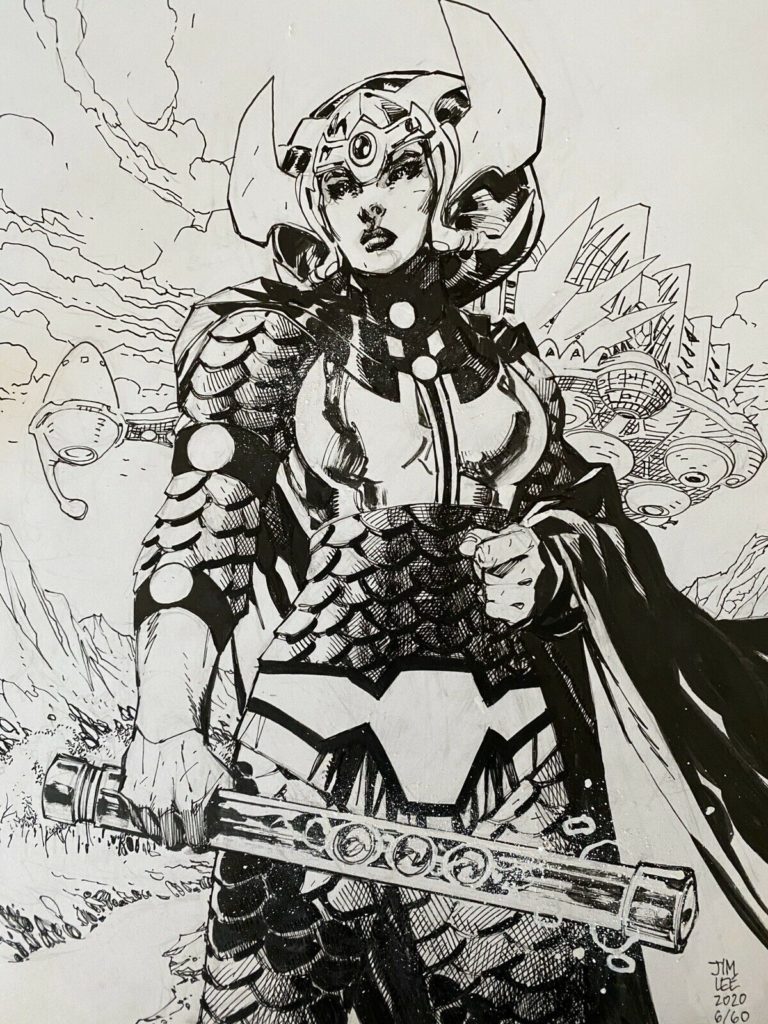 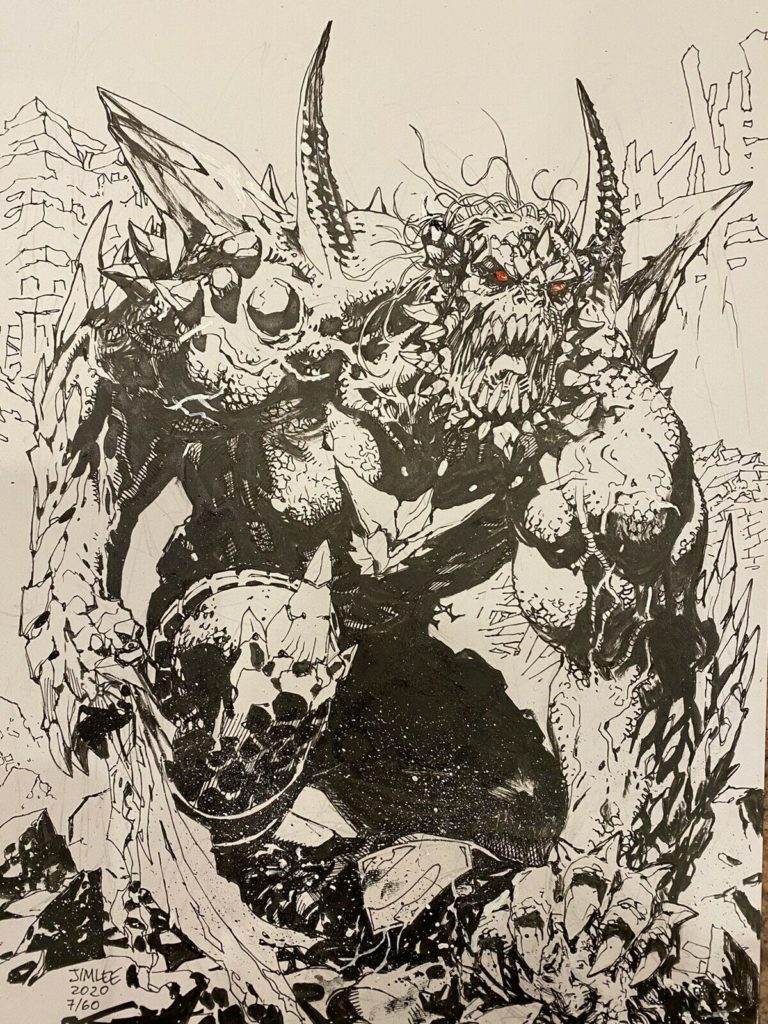 Description: “Original Sketch Of DOOMSDAY by Jim Lee 9”x12”. Sketch 7 of 60 that I am committing to doing. One a day, each of a different DC character! This one is the one who killed Superman back in the 90’s!” 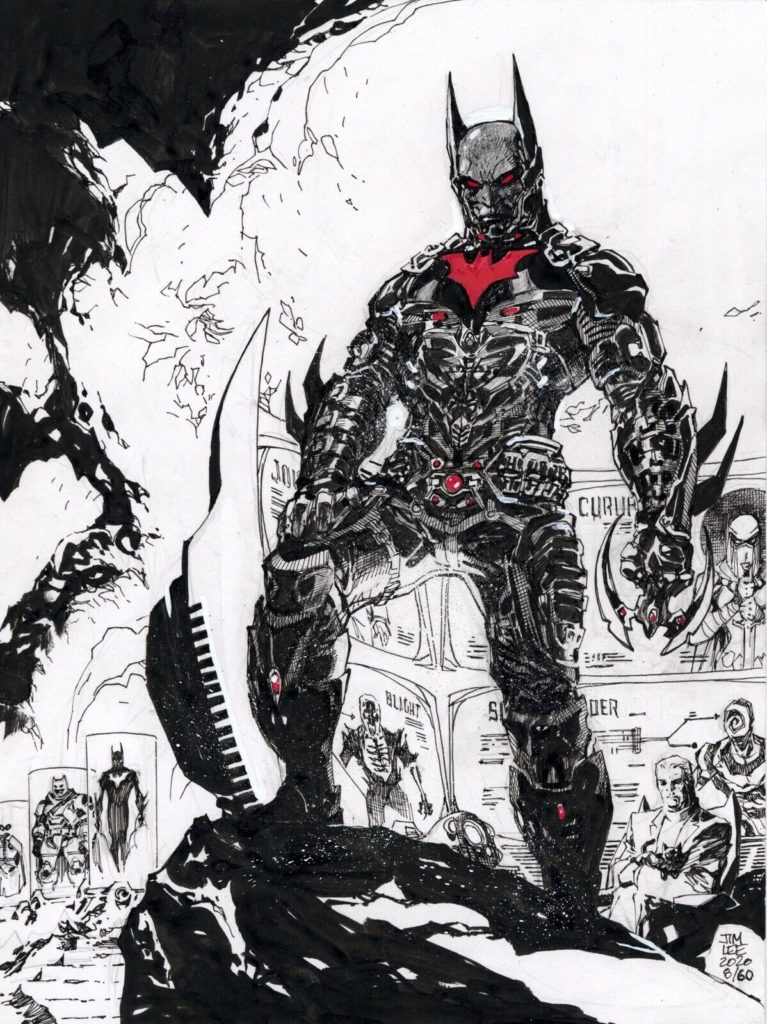 Description: “Original Sketch Of Batman Beyond From Arkham Knight By Jim Lee 9”x12”” 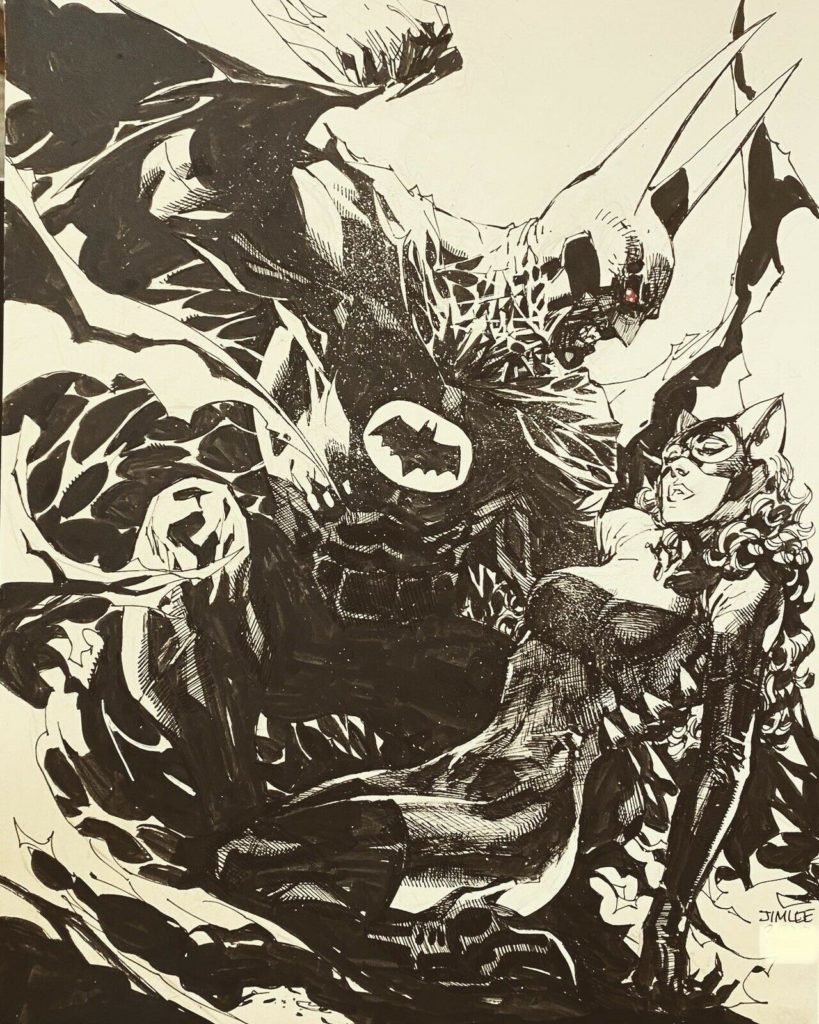 Another cover quality piece of original art by Jim Lee, reaching $17k, the highest price in the first 10 auctions.

Description: “Original Sketch Of BATMAN: RED RAIN by Jim Lee 9”x12”. As some of you might have noticed, I’m trying not only to showcase different unique characters with each sketch but also demonstrate different types of rendering, techniques, gestures and compositions! The goal is to keep them as feeling as hand crafted as possible. Drew influence from the great Kelley Jones who really made this version of Batman his own!” 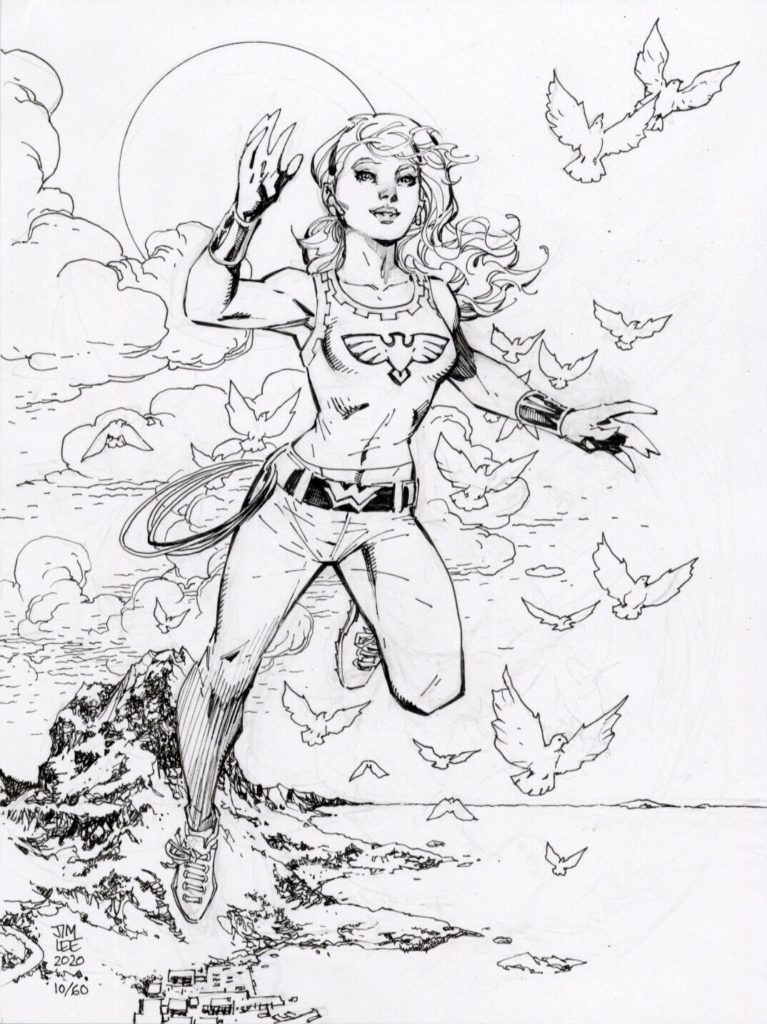 Description: “Day 10! Or as I like to think of it: 16.67% done! keeping the focus on DC female characters with WONDER GIRL (Cassie Sandsmark)! I went with a classic look for Cassie but updated the pants, made the eagle symbol a bit smaller and tweaked a couple other minor things but mostly drew inspiration from the great Todd Nauck who really was the artist who defined Young Justice for me. Tried to mix in a little Nauckisms into this one—no fancy ink smudges, white out splatter, drybrush this time. All controlled line weights as much as I could muster.“

Come back next week-ish for part two of our look into Jim Lee original art sales to help comic book stores during the Coronavirus pandemic. I’m curious to see if the next 10 pieces will match or surpass the $90k raised with the first 10.